Find out more about our products! 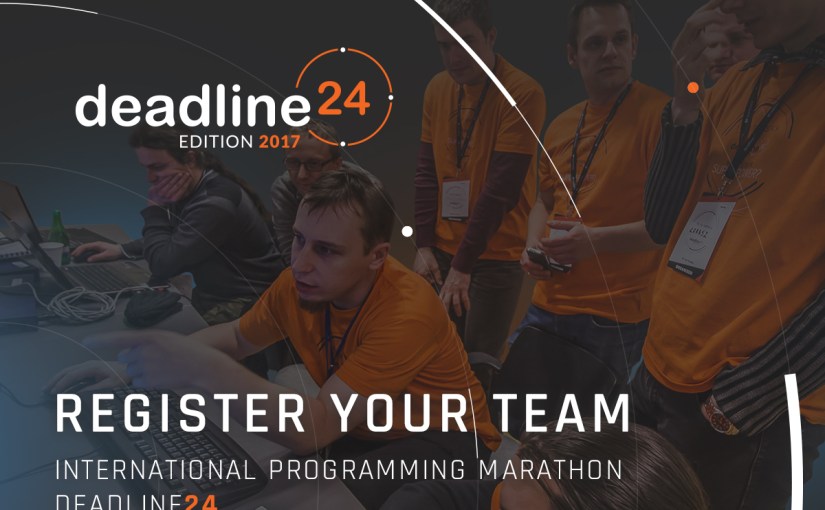 The finals of the 9th edition of Deadline24, an international team programming marathon, will be held on April 22-23, 2017. One more time, the best teams from all over the world will face each other on the virtual arena. Teams of three can register up until March 9. On March 12, 2017 they will be competing in the qualifying round.

Deadline24 is a programming marathon, organized continually since 2009 by Future Processing. Currently, it is an international competition and year by year it becomes more and more popular.

During the contest, the teams of three tackle algorithmic problems for 24 hours. Everyone can demonstrate knowledge, skills, creativity and perseverance.

The marathon is composed of two phases. The qualifying round starts on March 12. For 5 clock hours the teams will be solving tasks and generating responses assessed by the verification server. This stage of the competition is remote. Then, the best teams of the qualifying round will meet at the 24-hour finals held on April 22-23, 2017.

Marathon’s venues are always closely related to the industrial character of the Silesia Province. Last year, the final challenge took place in Muzeum Śląskie in Katowice, four stories underground. In the previous years, the participants visited also Contemporary Art Gallery ”Elektrownia” in Czeladź and Guido Historic Coal Mine in Zabrze.

Last year’s edition gathered almost 1500 participants from all over the world. The qualifying round attracted contestants from Poland, Germany, Russia, Ukraine, Hungary, Great Britain, Croatia, Spain, Finland, Estonia, China, Egypt, Indonesia, Nigeria, Brazil, Bangladesh and India. Among the finalists there were employees of such companies as Google, Oracle and Yandex.

Deadline24 is organized by Future Processing, a company engaged in the global software market since 2000. Today it consists of more than 700 employees delivering high-quality systems for worldwide clients operating in different market sectors. Specialists from Future Processing have knowledge and experience in various fields and industries, such as healthcare, smart city, property management and environmental protection.

A key factor behind the company’s success is the people. They share their passion and knowledge with others during different events organized by Future Processing. Besides the Deadline24 marathon, there are also Quality Excites and Future Dev Day conferences and a project dedicated to students – DPTO.

We would like to invite all Spoj users to Krakow, to a next edition of Lambda Days! All our users can get special 10% discount, just contact us and we will give a special code!

Lambda Days is a one of a kind experience in the functional world. To us Scala, Erlang, Haskell, Elixir, F#, Lisp, Clojure and many other emerging technologies are more than languages – they are new perspectives on how to understand and tackle challenges of every day work. We’ve sold half of Early Bird tickets since starting the sale! Make sure you get yours – register today:

Lambda Days is a two-day conference on functional programming and an experience you just can’t miss!

Wow our programme committee with your submission – join Jose Valim,

Rob Martin, Tomasz Kowal and others in our 2017 line-up.

If you are interested in publishing your research results related to functional technologies, languages and applications, you can submit your paper to the Research Track. You can get published in the Special Section on Functional Paradigm for High Performance Computing of Future Generation Computer Systems (IF=2.430). 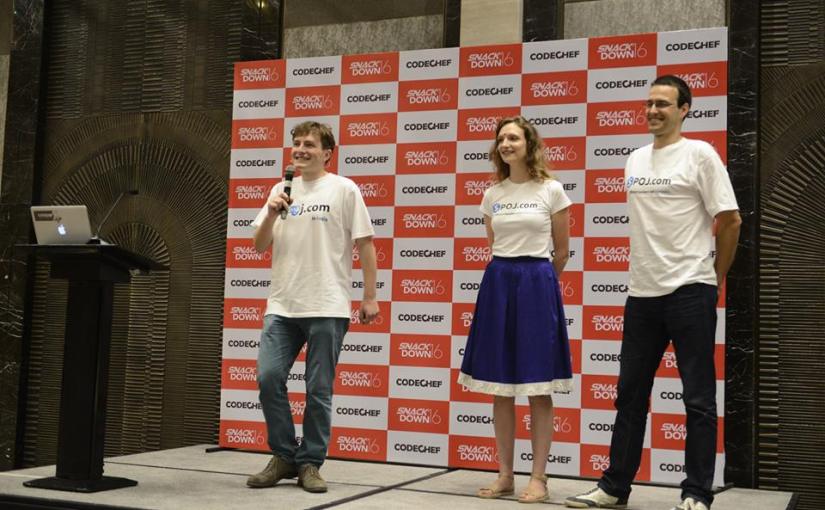 Recently we had a chance to spend a couple of days with our oldest and best friends – the CodeChef Team. We have been providing backend for CodeChef for almost 8 years now and we are extremely happy and proud to see the obvious success of CodeChef! ‪#‎SnackDown2016‬ was an amazing event, and this is all thanks to the wonderful people who received all the participants and guest with extraordinary hospitality.

Thank you, Guys! From the bottom of our hearts! 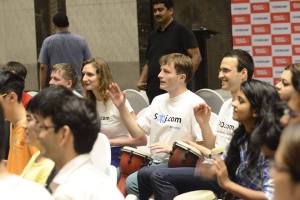 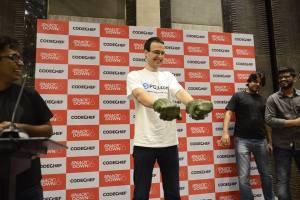 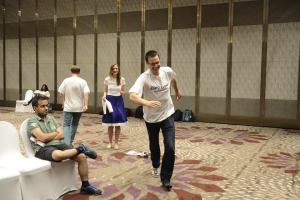 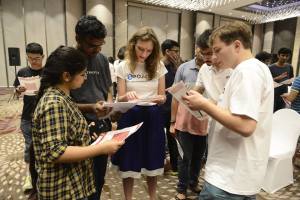 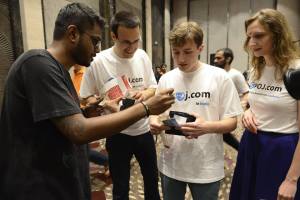 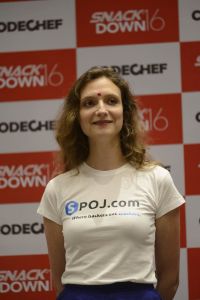 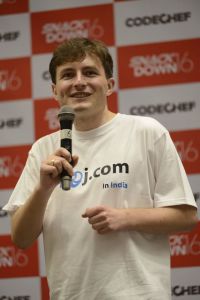 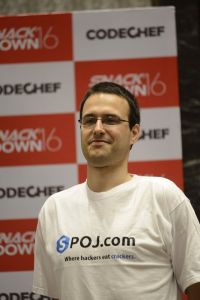 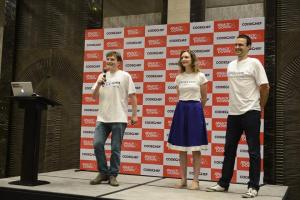 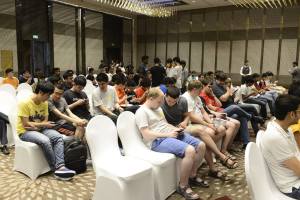 Spoj.com is happy to become a Community Partner of Hacker Earth in their flagship event – IndiaHacks, the world’s largest developer confluence, which aims to encourage programming and celebrate the spirit of coding among developers.

HackerEarth is conducting this conference to celebrate the spirit of programming by spreading the knowledge and catalyzing the desire to create something extraordinary. The conference will have Tech Talks, Panel Discussions, Tech Huddles, Tech Hangouts. Additionally on 18th of March starts 18 hours of hackathon where the top coders from the phase I of IndiaHacks will compete against each other.

“Technology? There’s no future in it” said some people. But ideas shape the course of History and the giant leap mankind has taken shows us the impact of technology.
Technology is not an event; it’s just part of the everyday learning. And why not celebrate this part of our everyday life? This is Pragyan put into simple words. The annual international Techno-Management fest of NIT Trichy, Pragyan is completely run by students, with a volunteer work force of more than 700 students. Pragyan is the first student-run organization in the world and the third overall next only to London Olympics and Manchester United to get an ISO 20121:2012 Certification for Sustainable Event Management. Held during the month of February, Pragyan sees thousands of participants every year. And these are just facts.
Commitment to the highest levels of quality in the event is the reason for Pragyan to expand its foothold across the globe. Pragyan presents an opportunity to innovate, for ideas to evolve into reality. Innovation and technology go hand in hand, thus lays the need to know technology, use technology and celebrate technology. With teams from over 60 countries taking part in the contests, Pragyan hosts more than 50 events spanning across 11 genres. These clusters depend whether the event is circuital, non-circuital, managerial, design based, etc. Apart from the prize money, these events provide an excellent platform to learn, compete, show-off and have fun.
Pragyan is not just about events. The Guest Lecture series organized by Pragyan is one of the best and the stage has seen quite a number of managerial genies, tech-wizards, hotshot entrepreneurs, media moguls; each one, a professional in their field.
What good is a tech-fest without the stages seeing a good verbal joust? Thus came ‘Crossfire’, a panel discussion, which aims to provide a global platform for the academia, industry and government to interact with the fraternity. Then there are Workshops, an integral part of Pragyan. Every year, Pragyan teams up with the best technological organizations to come up with challenging and useful workshops, just for the participants. Pragyan also has a high social responsibility quotient and organizes year round activities for the same.
The varied Exhibitions offer a sneak peek at what the world is working on. Along with this, the students of NIT Trichy, under the banner of ‘Sangam’ display models developed by them on various problems. And the fun element of Pragyan, ‘Infotainment’ delivers an exciting mix of knowledge and entertainment through various artists.
Outreach, a Social Responsibility and so on, Pragyan is much more than what meets the eye. Celebrating Technology for 11 years, this edition of Pragyan brings out a way of seeing science differently.
For a full picture, visit www.pragyan.org or Pragyan’s Facebook page: fb.me/pragyan.nitt 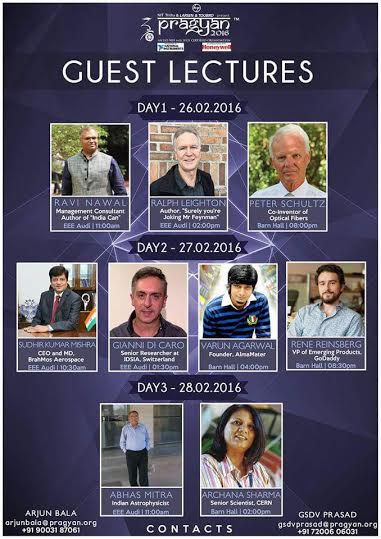 It is time for the 8th edition of Deadline24, an international programming marathon 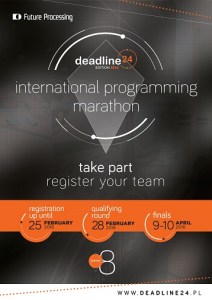 The finals of the 8th edition of Deadline24, an international team programming marathon, will be held on April 9-10, 2016. Teams of three can register up until February 25. On February 28, 2016 they will be competing in the qualifying round. Deadline24 is an international programming marathon, organized continually since 2009 by Future Processing. The finals consist in the rivalry of the teams of three who tackle algorithmic tasks for 24 hours. The teams can sign up until February 25, 2016. Registration is available on the contest

The marathon is composed of two phases. The qualifying round starts on February 28 at 9:00 AM (CET) sharp. For 5 clock hours the teams will be solving tasks and generating responses assessed by the verification server. This stage of the competition is remote.

Then, the best teams of the qualifying round will meet at the 24-hour finals held on 9-10 April, 2016. Marathon’s venues are always closely related to the industrial character of the Silesia Province. In the previous years, the finals took place in the Guido Historic Coal Mine at 320 meters below ground, in the historic “Ludwik” Mine in Zabrze and in the Contemporary Art Gallery ”Elektrownia” in Czeladź. 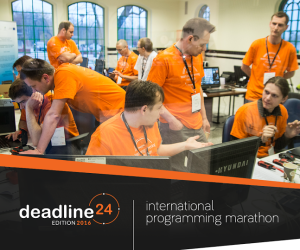 “The tasks were difficult but… interesting. Same as the venue”. – said one of the last year’s finalists Mikko Sysikaski [Google] from the Finnish team with a Polish name “Drzewo Licznikowe”. Last year’s edition gathered more than 1000 participants from all over the world. The qualifying round attracted contestants from Poland, Czech Republic, Ukraine, Serbia, Latvia, Slovakia, Russia, Germany, Austria, Switzerland, Spain, Croatia, Great Britain, Belarus,

Hungary, Nigeria, Taiwan and India. Among the participants, there were employees of such companies as Google, Ericsson, Facebook, Microsoft, Bank Zachodni WBK, Wirtualna Polska, Unity Group, InsERT, Nokia and Prezi. Deadline24 is organized by Future Processing, a company engaged in developing high quality software for business and industry. They have been ranked among the top 50 fastest growing technology companies in Central Europe, according to the Deloitte’s “Technology Fast 50” ranking.